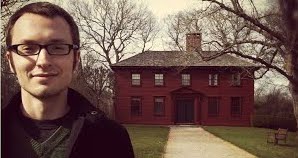 John Grey, Academic Specialist in the Department of Philosophy, is using his research and teaching experience to develop dynamic and engaging courses in logic, metaphysics and the history of philosophy.

Grey first discovered his passion for teaching as a doctoral student at Boston University.

“I knew that I really wanted to keep studying philosophy,” he said. “What I found in graduate school was that I enjoyed teaching because it gave me an occasion to revisit the foundational principles of philosophical ideas that got me excited about philosophy in the first place.”

A few years after earning his Ph.D., Grey was brought to MSU to focus the emphasis of his work on teaching.

“One of the neat things about my role is that I get to think about how I want my teaching to shape my research in a really straightforward way,” he said. “I have been recently motivated in large part by the interests of my undergrads. A lot of them convey to me that they want to learn more about the lesser-known figures in modern philosophy.”

Based on his students’ interests, Grey started to research women authors of the modern period in philosophy, which began around the 17th century. Three years ago, he began studying Ann Conway and Margaret Cavendish, both 17thcentury English philosophers.

One of the neat things about my role is that I get to think about how I want my teaching to shape my research in a really straightforward way.

“[These philosophers] have a lot of really fascinating things about the canonical figures that I am used to teaching about in my modern philosophy course. They provide arguments that many times can be difficult for the canonical philosophers to answer,” Grey said. “It’s not just interesting to have additional voices in the course, but they provide arguments and reasons for worrying about traditional positions that were not yet included in the discussion. My students love this, I have been very happy with the reception.”

Another course that Grey teaches every spring semester is on metaphysics. That course is constantly changing, depending on the interests of students who have taken the class.

“It is a contemporary philosophy course where we examine the ways authors in the 20th century have looked at questions about the nature of existence and certain paradoxes about existence that arise as soon as you start thinking about the subject,” Grey said.

The second half of this course turns to personal identity and personhood where students are able to ask questions like what exactly is a person? And, is personhood the same as humanity? Then at the end of the semester, the class focuses on the dynamic topic chosen by students in the previous course.

“Every semester, we vote a topic off the island,” Grey said. “Last semester, we focused on the nature of time. This is a debate that has been going on since Plato. But, there is a lot of 21st century work that has been done on this already. Once we got up to speed on that literature, everybody voted it off and said this year we should study free will.”

I have been recently motivated in large part by the interests of my undergrads. A lot of them convey to me that they want to learn more about the lesser-known figures in modern philosophy.

Since the course is never the same, past students often contact Grey to find out what the class is currently focusing on.

“I get the feeling that they would do it again with the new readings,” Grey said. “It’s the nature of the class.”

Looking forward, Grey is developing a course with David Godden, Assistant Professor in the Department of Philosophy, that will be a 200-level philosophy course on paradoxes.

“There is something so fascinating about paradoxes in that it seems like all philosophical problems can be expressed in the form of a paradox,” Grey said. “The philosophical problems that seem to hold our attention all seem to be connected to a paradox in some way. I am looking forward to using this course as a way to look more deeply into the nature of paradoxes.”